After Fabian's post on the topic, I have recently returned to thinking about the subject of sparse singular value decompositions (SVDs) in Python.

For those who haven't used it, the SVD is an extremely powerful technique. It is the core routine of many applications, from filtering to dimensionality reduction to graph analysis to supervised classification and much, much more.

I first came across the need for a fast sparse SVD when applying a technique called Locally Linear Embedding (LLE) to astronomy spectra: it was the first astronomy paper I published, and you can read it here. In LLE, one visualizes the nonlinear relationship between high-dimensional observations. The computational cost is extreme: for N objects, one must compute the null space (intimately related to the SVD) of a N by N matrix. Using direct methods (e.g. LAPACK), this can scale as bad as $\mathcal{O}[N^3]$ in both memory and speed!

I needed a better option. I came across the package ARPACK, a well-tested implementation of iterative Arnoldi Factorization written in Fortran. The shift-invert mode of ARPACK served my needs, so I spent some time extending the scipy ARPACK wrapper so I could address my problem. I also helped Fabian and others implement the beginnings of the manifold learning module in scikit-learn.

Even after moving on to other problems, I found that the SVD was at the core of nearly every component of my research while working toward my PhD. You can see this in several other projects I was involved with over the years, including my PhD Thesis, which centered on Astronomical applications of Karhunen-Loeve analysis -- a method, again, intimately linked with the SVD.

Hopefully this brief tour has convinced you of the power of the SVD in addressing real research problems. Now to the code.

What I didn't know at the time I worked on the ARPACK wrapper is that there are several more good options available for computing SVDs - and most now have passable Python wrappers which integrate well with scipy's sparse matrices. I'll briefly describe them here.

LAPACK is the standard specification of efficient linear algebra routines across computing systems, and contains routines to compute a direct (i.e. non-iterative) SVD of a dense matrix. The performance of LAPACK varies from system to system, and implementation to implementation. The algorithm is generally $\mathcal{O}[N^3]$, and partial decompositions are (in general) not available. Though not technically the same, I would group alternatives like ATLAS (an optimized open-source matrix library) and MKL (Intel's proprietery library for fast numerics) in the same category. I don't have much personal experience with MKL, so if I'm not doing it justice, please feel free to admonish me in the comments!

LAPACK is wrapped by Numpy and Scipy, and is at the core of many of the routines in numpy.linalg and scipy.linalg, including the svd function in each.

As I mentioned above, ARPACK implements a fast iterative/partial eigenvalue decomposition on a general linear operator. One of its strengths is that unlike LAPACK, it does not depend on your matrix being stored in any standard layout: all that is required is to provide a routine which implements matrix-vector multiplication. This means that as well as dense matrices, ARPACK can be used on any sparse matrix or even a general linear operator which maps one vector space to another.

ARPACK does not have a native SVD implementation, but it is possible to exploit the relationship between eigenvalue decompositions and singular value decompositions to compute an ARPACK svd: this is what the current svds routine in scipy.sparse.linalg does: see the documentation here. One issue with this implementation is that to compute the SVD of a matrix M, it must implicitly compute $M^T M$, and that may lead to issues of both numerical accuracy and computational efficiency.

Before Fabian's blog post, mentioned above, I had never heard of SVDLIBC. It is also an Arnoldi-iteration based implementation, but SVDLIBC requires a specific sparse matrix format to operate. Fortunately for scipy users, this storage format maps directly to the CSC sparse matrix format, so the SVDLIBC svd can be computed without any memory copies of the scipy matrix (assuming, of course, your matrix is already stored as CSC or CSR!). A bare-bones python wrapper for the routine exists in the sparsesvd package.

PROPACK is another well-tested Fortran package which computes the SVD directly using an Arnoldi Factorization scheme: like ARPACK, it only depends on a callback implementing left- and right-multiplication operations, rather than making use of any specific sparse storage format. Like SVDLIBC, it computes the svd directly, saving computation time and leading to greater numerical accuracy. From my brief search, it seems that no python wrapper is readily available (though I heard that David Cournapeau had worked on one). Until recently, the PROPACK license was unspecified, precluding its inclusion in Scipy or other BSD-licensed packages. It appears that just recently, PROPACK itself was moved to a BSD license, so there is now the possibility of including it in the Scipy universe.

I have begun working on a full-featured PROPACK wrapper in the Scipy style, using the excellent F2Py Fortran interface generator. You can find the code in my pypropack repository on Github. As of this writing, there is still a lot to do to make the code releasable, but there is enough there to enable some quick benchmarks.

To benchmark these four SVD options, I used the following code:

This creates square sparse matrices, measures the computation time as a function of the matrix size, and plots the results. The results on my 3-year old linux box are below: 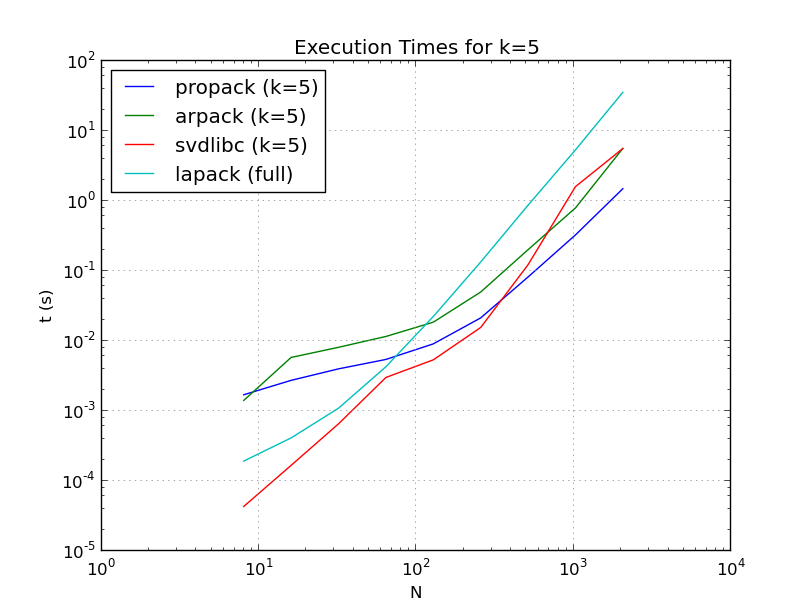 A few comments: First, as expected, LAPACK is much slower than the rest. This is due to two factors: first, LAPACK computes the full SVD, while the other methods compute only partial SVDs (the k=5 largest singular values). Second, the LAPACK on my system is not well-optimized: I could probably reduce this by at least an order of magnitude if I were to use an ATLAS install optimized for my system. If you need a full SVD, it will be hard to beat LAPACK/ATLAS/MKL in terms of speed (but in terms of memory consumption, as Fabian showed, LAPACK can be pretty bad). Because SVDLIBC, ARPACK, and PROPACK all use Lanczos/Arnoldi iteration, they should all similarly out-perform LAPACK on the memory question.

Second, the good performance of SVDLIBC for small matrices is probably due to its direct use of the CSC memory within the Fortran code. For matrices this size, the Python overhead of invoking the callback in ARPACK and PROPACK kills any performance gains from the more sophisticated algorithms. As the matrices grow, we see that ARPACK and PROPACK begin to out-perform SVDLIBC.

Finally, we see that for these test cases, PROPACK is consistently faster than ARPACK by a factor of 5 or so: nothing to scoff at! I haven't rigorously tested the claims of increased numerical stability in PROPACK, but those two pieces point to PROPACK as the preferred method by far.

I hope to continue developing the pypropack wrapper on github, and once I'm happy with it, incorporate it into Scipy's sparse linear algebra tools. I would love help with this: in particular, if there are any F2Py wizards out there, I'm currently having what I think is a memory issue with the callback function that I can't seem to track down.

Hopefully this post has helped convince you of the importance of SVDs in scientific computing, and also of the benefits of working on PROPACK incorporation in the scientific Python universe. This sort of thing won't happen unless someone like you decides to work on it! That fact ends up being both a weakness and an incredible strength of open-source packages.