This week, for part of a textbook I'm helping to write, I spent some time reading and researching the history of Python as a scientific computing tool. I had heard bits and pieces of this in the past, but it was fascinating to put it all together and learn about how all the individual contributions that have made Python what it is today. All of this got me thinking: for most of us, Python was a replacement for something: IDL, MatLab, Java, Mathematica, Perl... you name it. But what will replace Python? Ten years down the road, what language will people be espousing in blogs with awkwardly-alliterated titles? As I thought it through, I became more and more convinced that, at least in the scientific computing world, Python is here to stay.

Now I’m not simply talking about inertia. Javascript has inertia, and that's a main reason that web admins still begrudgingly use it. But Python is different. Yes, it's everywhere, and yes, something so ubiquitous is hard to shake. But look at the 1970s: punch card programming was everywhere, and now it's nothing but a footnote. Inertia can be overcome with time. But I think Python’s hold is much deeper than that: I think it will remain relevant long into the future. Here’s why:

The first reason Python will be around for a while is GitHub. GitHub has done wonders both for Python and for the broader open source community. It has replaced the clunky Trac system of submitting static patches to projects, and removed the contribution barrier for the core scientific python projects. Numpy, Scipy, and Matplotlib were all moved to GitHub in late 2010, and the results have been impressive. I did some quick data mining of the commit logs on GitHub to learn about the rate of new author contributions to core python projects with time, and this is what I found: 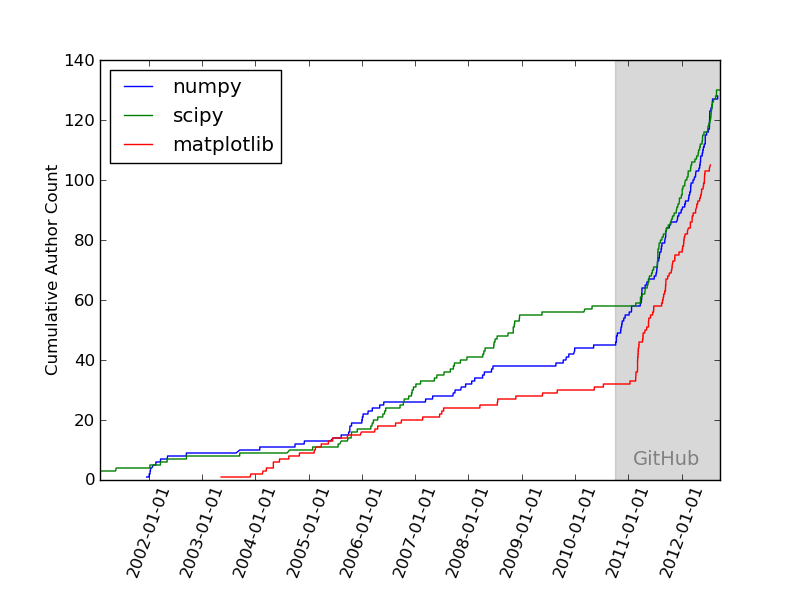 See it? The late 2010 transition to GitHub is extremely apparent, and this reflects the first reason that NumPy, SciPy, Matplotlib, and Python will remain relevant far into the future. Python not only has an astoundingly large user-base; thanks to GitHub, it has an astoundingly large and ever-increasing developer base. And that means Python is well-poised to evolve as the needs of users change.

The second reason Python will be around for a while is Julia. This statement may strike some as strange: Julia is a language which aims to improve on many of Python’s weaknesses. It uses JIT compilation and efficient built-in array support to beat Python on nearly every benchmark. It seems a likely candidate to replace Python, not a support for my assertion that Python will remain relevant. But this is the thing: Python’s strength lies in community, and that community is incredibly difficult to replicate.

A recent thread on the julia-dev list highlights what I’m talking about: in it, Dag Seljebotn, a core developer of Cython, contrasts the strengths of Python (large user- and developer-base, large collection of libraries) with the strengths of Julia (state-of-the-art performance, JIT compilation). He proposes that the two languages should work together, each drawing from the strengths of the other. The response from the Julia community was incredibly positive.

The Julia developers know that Julia can’t succeed as a scientific computing platform without building an active community, and currently the best way to do that is to work hand-in-hand with Python. After this thread on julia-dev, the Julia developers were invited to give a talk at the Scipy2012 conference, and I think many would say that some good bridges were built. I'm extremely excited about the prospects of Julia as a scientific computing platform, but it will only succeed if it can embrace Python, and if Python can embrace it.

The next Travis Oliphant

The third reason Python will be around for a while is this: there will be another Travis Oliphant. What do I mean by this? Well, if you go back ten years or so, the Python scientific community was looking a bit weak. Numeric was a well-established array interface, and the beginnings of SciPy were built upon it. But Numeric was clunky, so some folks got together and built Numarray. Numarray fixed some of the problems, but had its own weaknesses. The biggest problem, though, was that it split the community: when the core of your platform has divided allegiances, neither side wins. Travis realized this, and against the advice of many, audaciously set out on a quest to unify the two. The result was NumPy, which is now the unrivaled basis for nearly all scientific tools in Python.

Python faces a similar crisis today: it is split in the area of High-performance and parallel computing. There is an alphabet soup of packages which aim to address this: Cython, PyPy, Theano, Numba, Numexpr, and more. But here’s the thing: someone will come along who has the audacity to strike out and unify them. I love this recent tweet by Dave Warde-Farley:

Maybe I’ve convinced you, maybe I haven’t. But I’m going to continue using Python, and I predict you will too. We'll see what the future holds for scientific computing, but in my mind, Python remains a pretty solid bet.

Finally, a brief post-script on the history of Python: some of the most interesting sources I found were this interview with Guido Van Rossum, the official Scipy history page, the Scipy2012 talk John Hunter gave this summer shortly before his sudden passing, and the numpy-discussion post John referenced in his talk. If you use Python regularly and have some time, I’d highly recommend browsing these: it’s incredible to see how the unwavering vision of folks throughout the years has led to what we have today: an unmatched open-source environment for scientific computing.

Edit: also check out the History of Python blog. Thanks to Fernando for the tip.